Summer at my Sister's

Twin sisters. One scorching summer. A bucketful of secrets.

Diana's life is perfect. Her twin sister, Josie's – not so much.

Diana has a rich and successful husband, two talented youngsters and an adorable dog. She always looks as if she's stepped from the cover of a magazine. Her immaculate second home by the sea, for idyllic summers with her perfect family, was actually featured in one.

Josie has a messy, compact flat, dates, but not relationships, and she can't even keep a houseplant alive. She moves from job to job, goes clubbing with her friends and often looks as if she's fallen through a hedge.

Although Josie loves Diana deeply, each year she declines the invitation to spend the summer with her sister. Or any other family holiday. Because Josie has a secret.

But is Diana's life so perfect? Or is she also hiding something? When secrets are revealed this summer, everything will change. Josie could finally have the life she's always wanted … if she's brave enough to take a chance.

This is the first book in my new series of standalone books set in Seahorse Harbour. 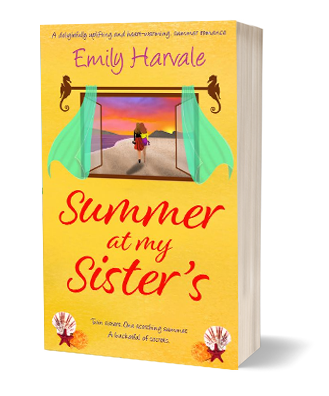 Between the Pages Book Club
Book blogger
"This was brilliant. I loved the setting, the characters, the community and the fabulous happy ending for everyone. It's funny in parts and I fell in love with Josies humour and sarcasm. I loved it all. A perfect chick-lit, romance and summer read"
SueS
Reader review
Another great can't put it down read from Emily Harvale
"Loved this new book from Emily Harvale, as usual you can't put it down, brilliant from the first page to the last. Cant wait for the next one to come along"
Bev Beach
Reader review
Another Gem From Emily Harvale!!!
"Loved this book... Love the characters... Everytime I read one of Emily's books, I could be right there. Total escapism and I fall in love with each character."